For those of you who are looking for a post to show you authentic vs fake, then welcome! I hope this is informative for you. I only wished I had seen this type of post before I purchased the first time. 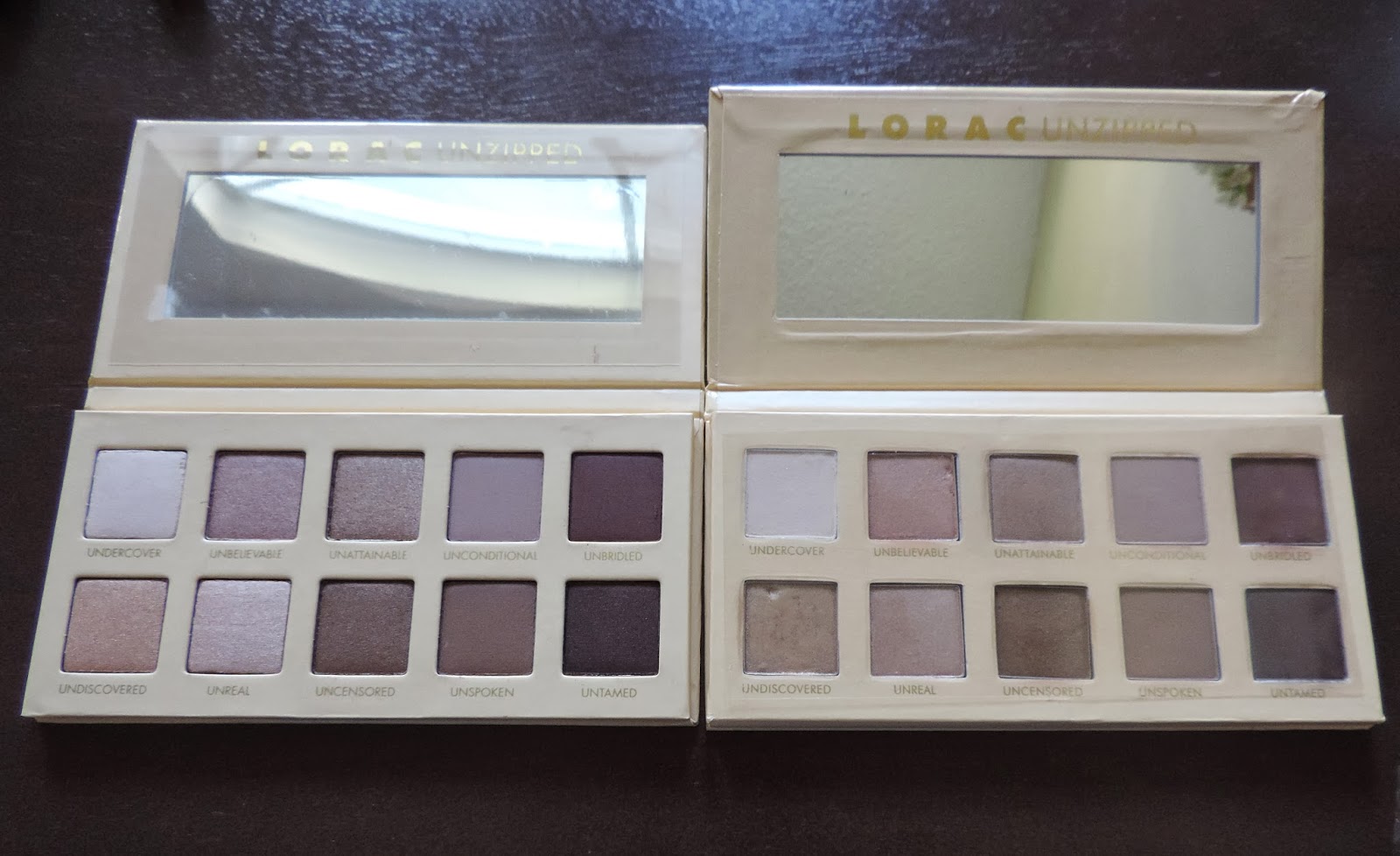 To start off, the Lorac Unzipped palette is a beautiful rose gold palette that retails for $40. It comes with a deluxe size of the Lorac Behind the Scenes primer. Since I like to save money, I figured I could look up coupons to lower the cost of the palette. However, I found none. So I resorted to look on eBay for a possible bid or lower priced option. Many of the bids and Buy It Nows were above $40, but I found two buy it nows that were $35 + free shipping. To me, that was a deal! One of the two was a beauty supplier, whereas the other one was an individual "normal" seller. (I consider myself a normal seller). Anyways, I went with the latter as I figured that one would be a safer option.

Before I bought the item, I did a search on Google for fake Lorac Unzipped palettes just to see if it was possible. I've seen plenty of blog posts and YouTube videos for fake Urban Decay Naked and Naked 2  palettes, but none for the Lorac Unzipped. I put that thought to rest in my mind, thinking there were no fakes. I then placed the order and waited for my long awaited beauty to come to my house.

However, once I finally had it in my hand and opened it, I felt that something was different; it didn't feel right; it wasn't as heavy as the tester one at Ulta. It also smelled like the cheap makeup you would receive as a child. On top of that, the pans were crooked and the eyeshadows didn't look as "plush"/full as the original palette. This is when my suspicions arose and I went to Ulta the next day to purchase a real one.

I did a side-by-side comparison of the authentic vs fake palette and here is what I discovered. (Beware, picture heavy!)

Comparisons
(For our general purposes, the real palette is either on the top or the left, and the fake is on the bottom or the right of the picture) 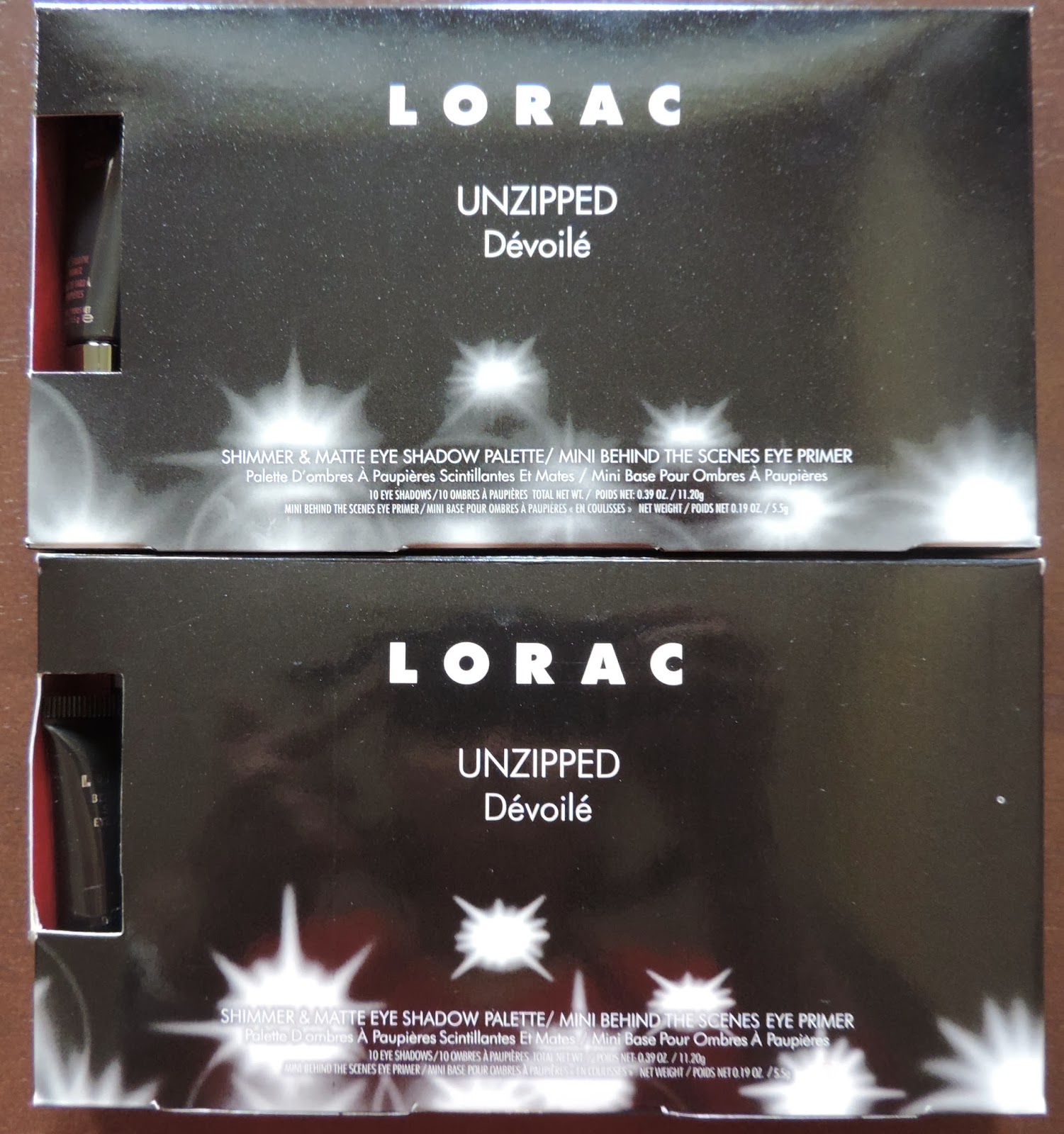 First thing I noticed about the two, is that the real packaging has an outline of the "stars/lights" where as the fake one is more blunt. 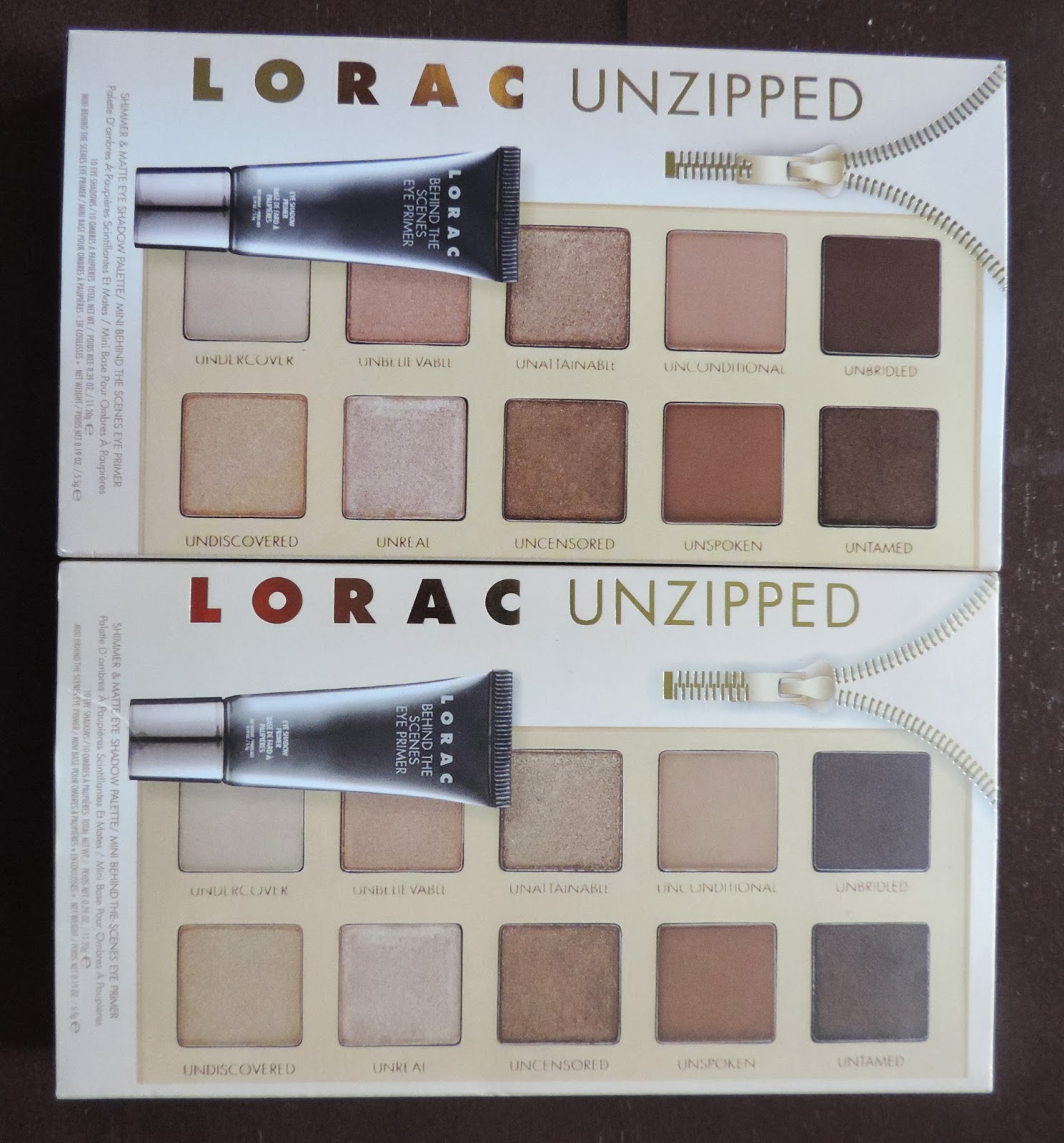 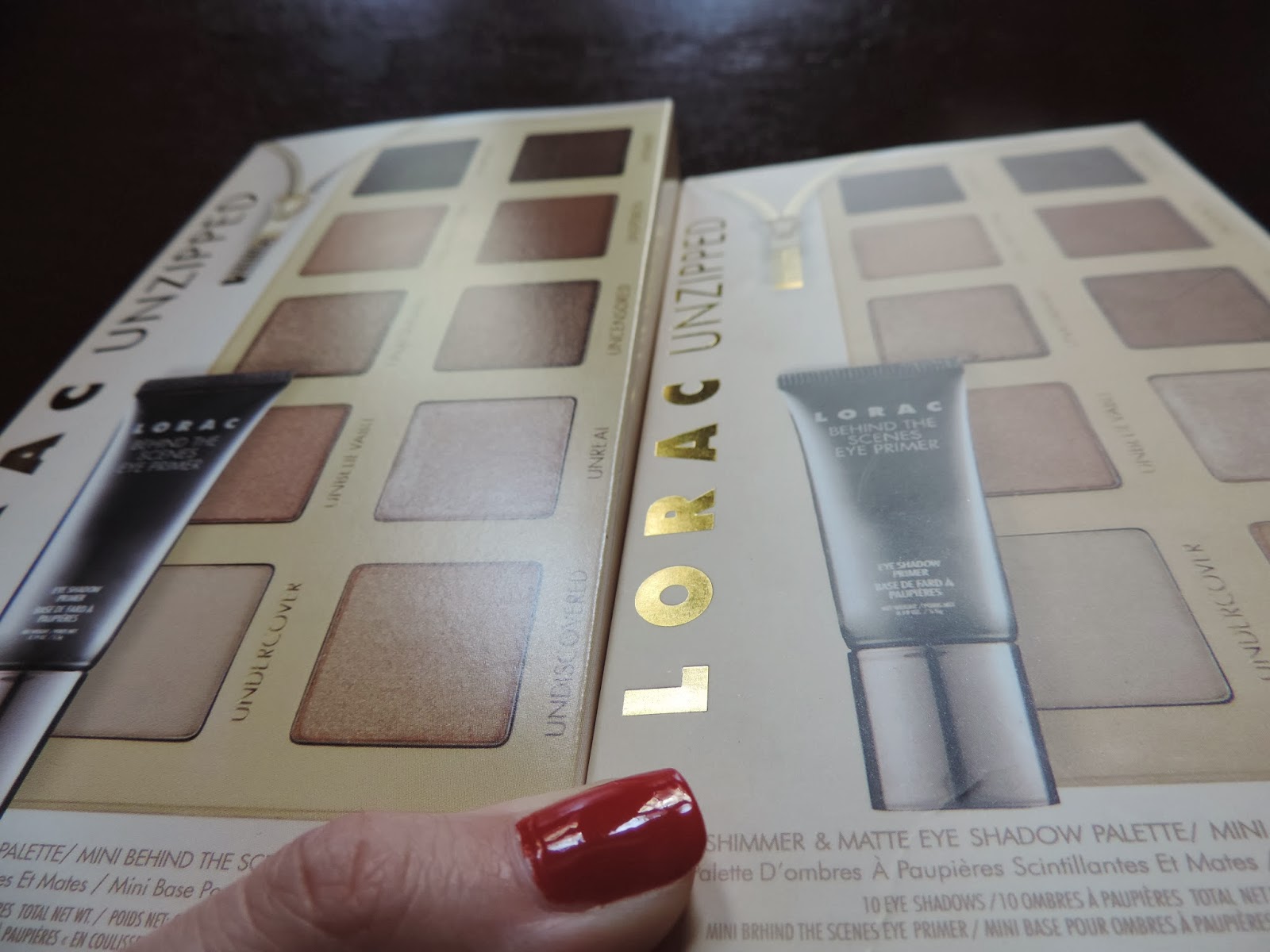 Next, you can see in this photo that the real one is more vibrant and is shiny, where as the fake is matte and looks faded.

The actual palette looks very similar except for the slider of the zipper; the real one is gold, whereas the fake one is white with a gold outline. 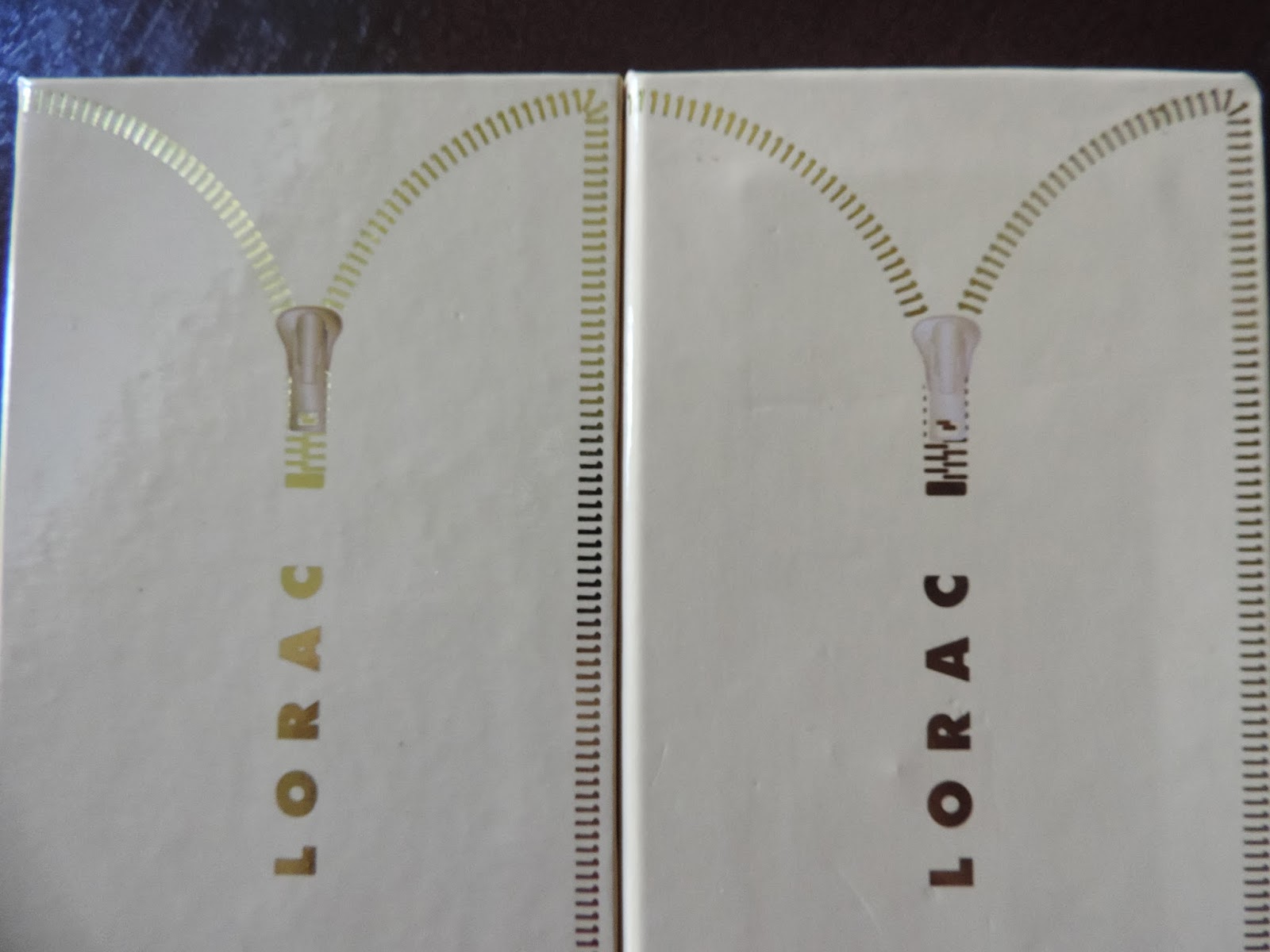 Here is a better look at it. 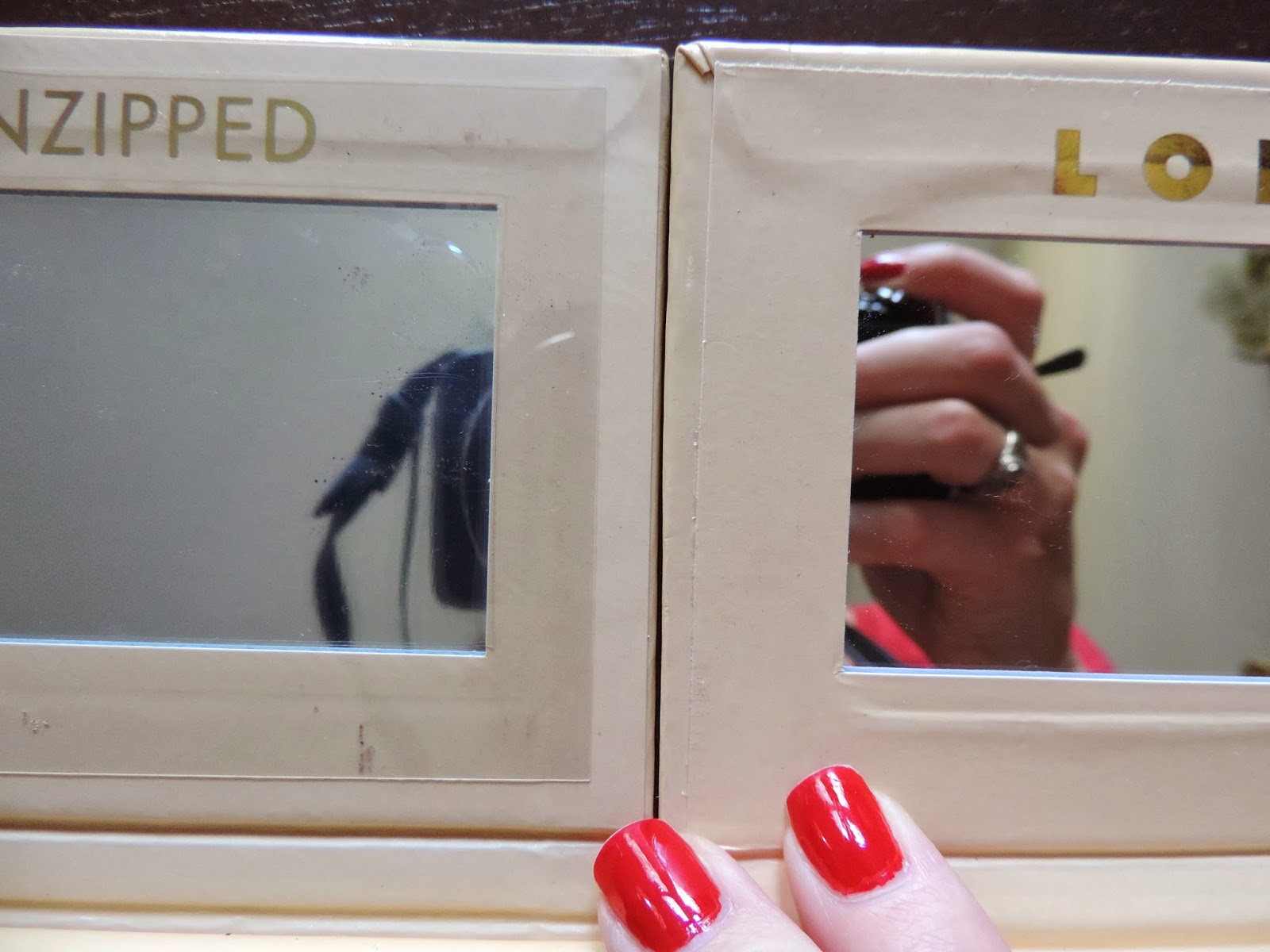 
It seems as if no one takes pictures of the back of a palette, but this is a very important factor in determining if it is authentic or not. 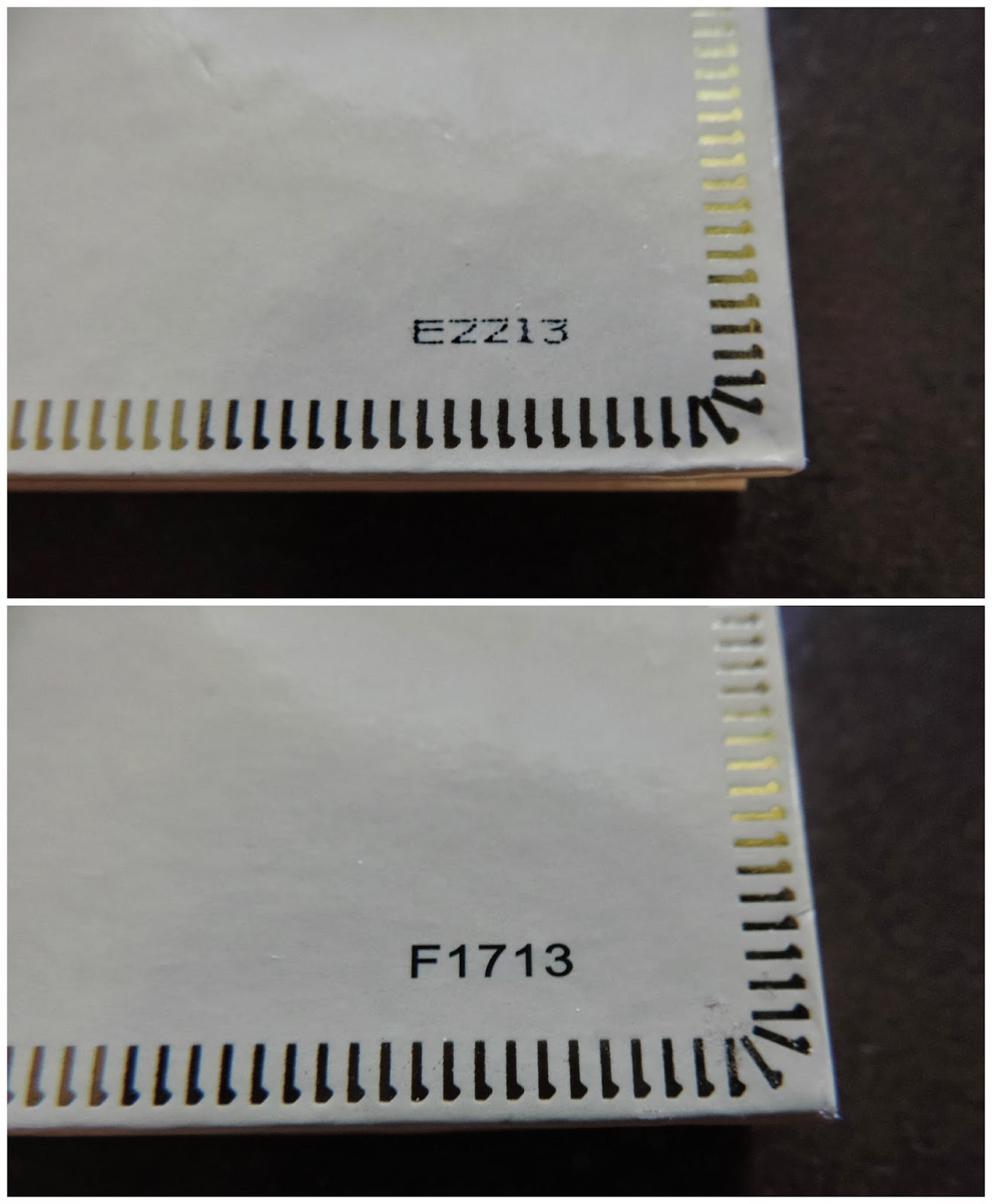 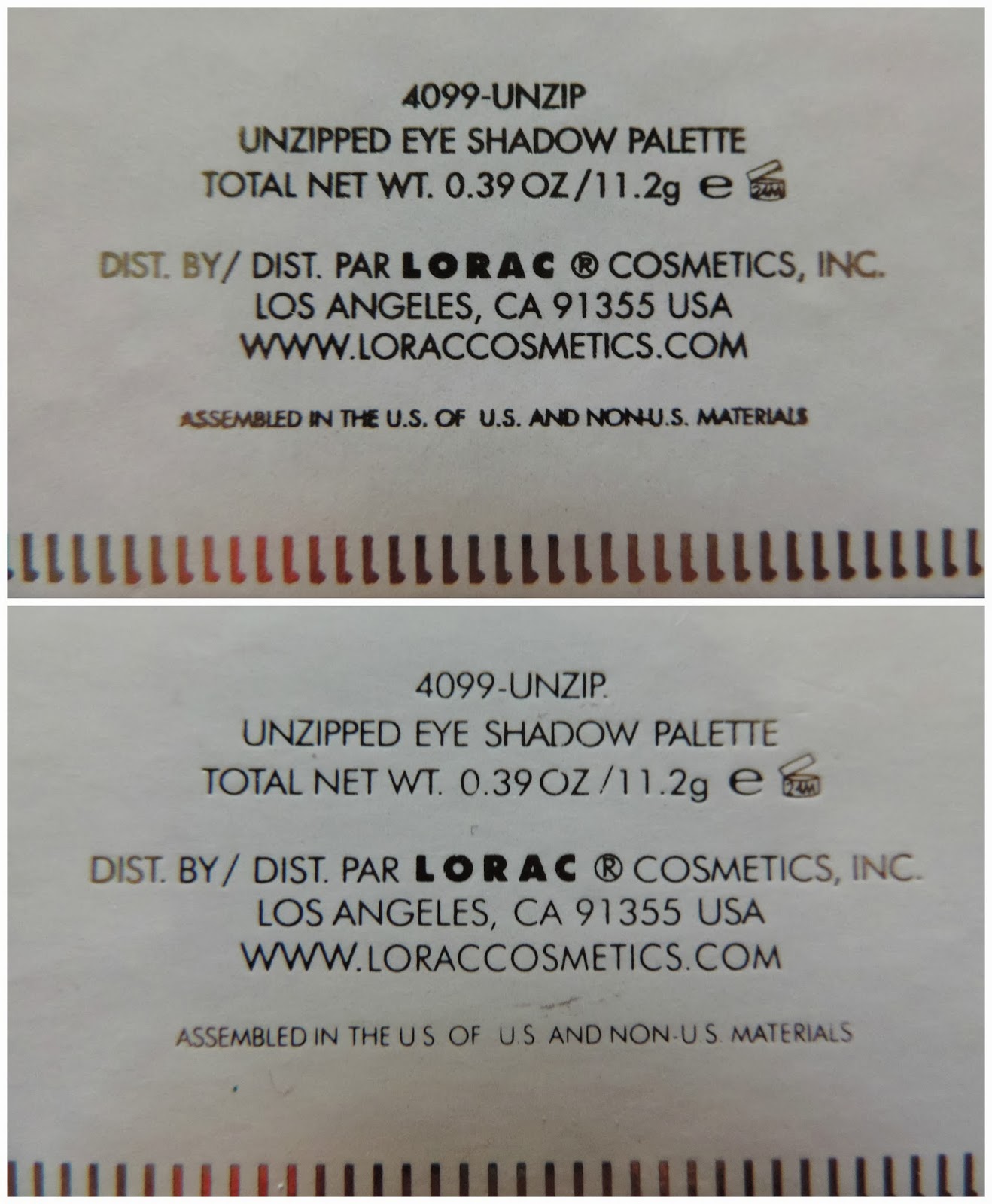 When closed, the real one shuts completely, but the fake one is raised up a bit since it was made unevenly.

Now onto the inside! 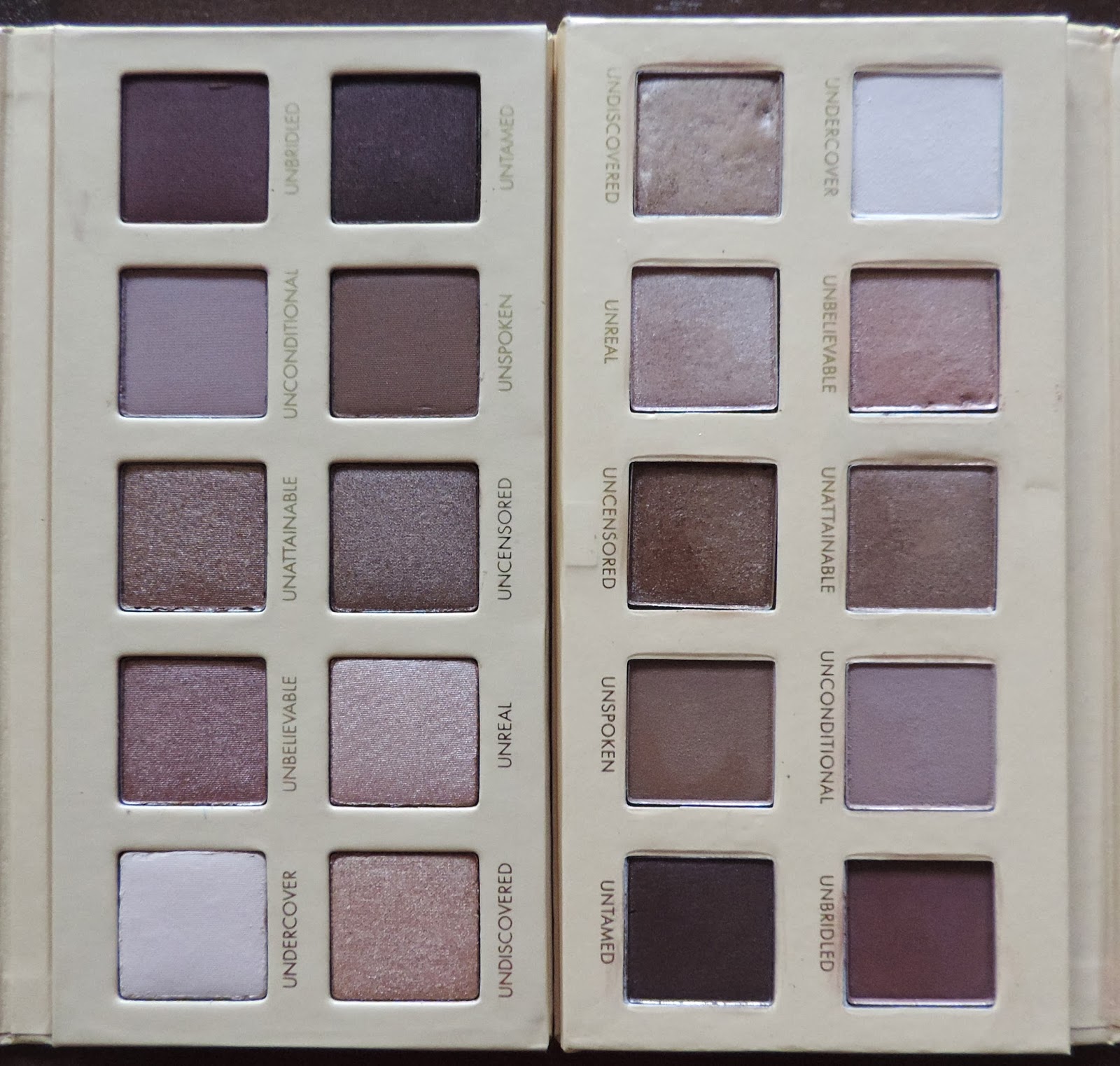 Some of the nicks you see on the right palette are from when I was removing the plastic covering, so it got messed up. 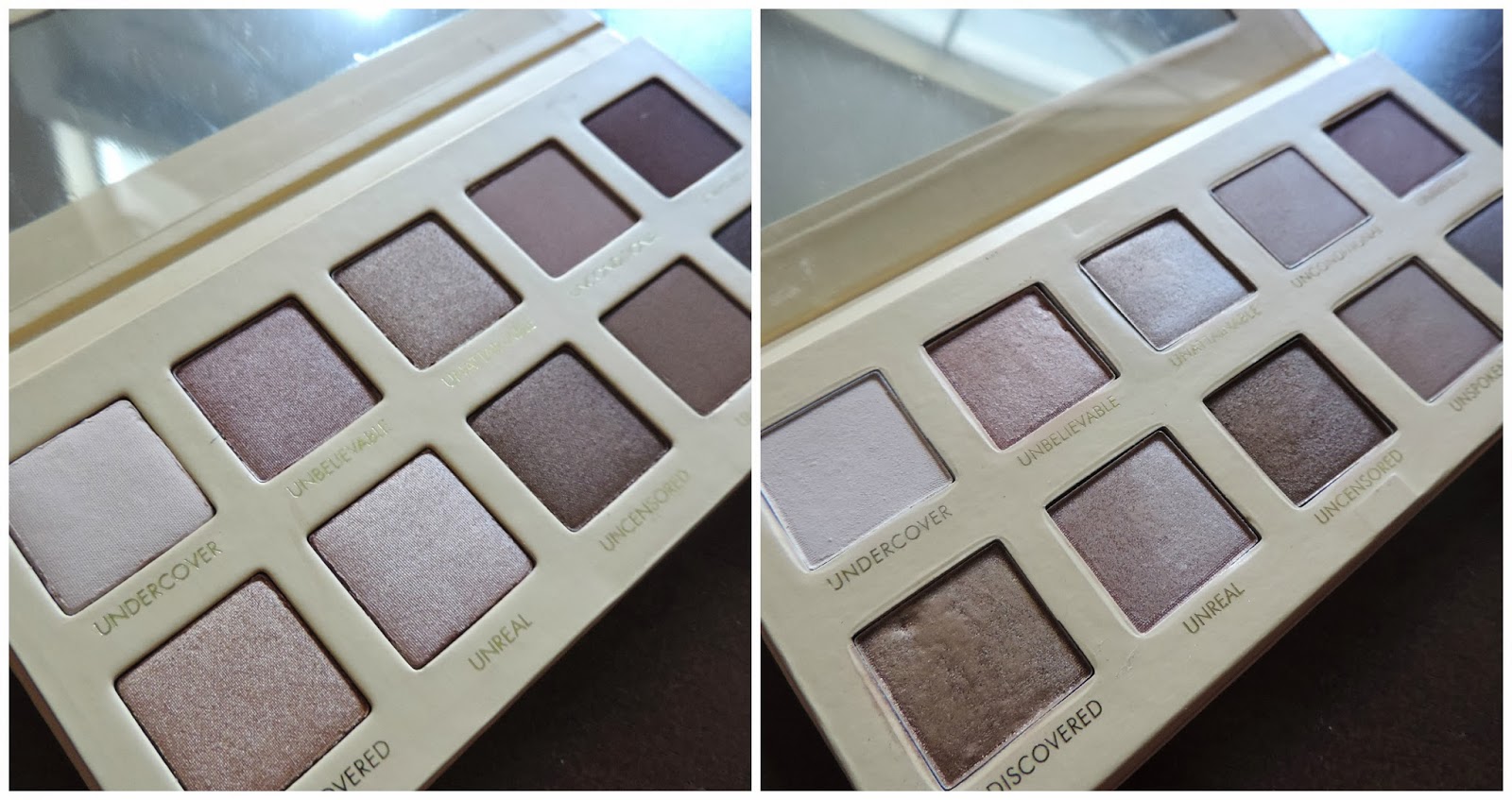 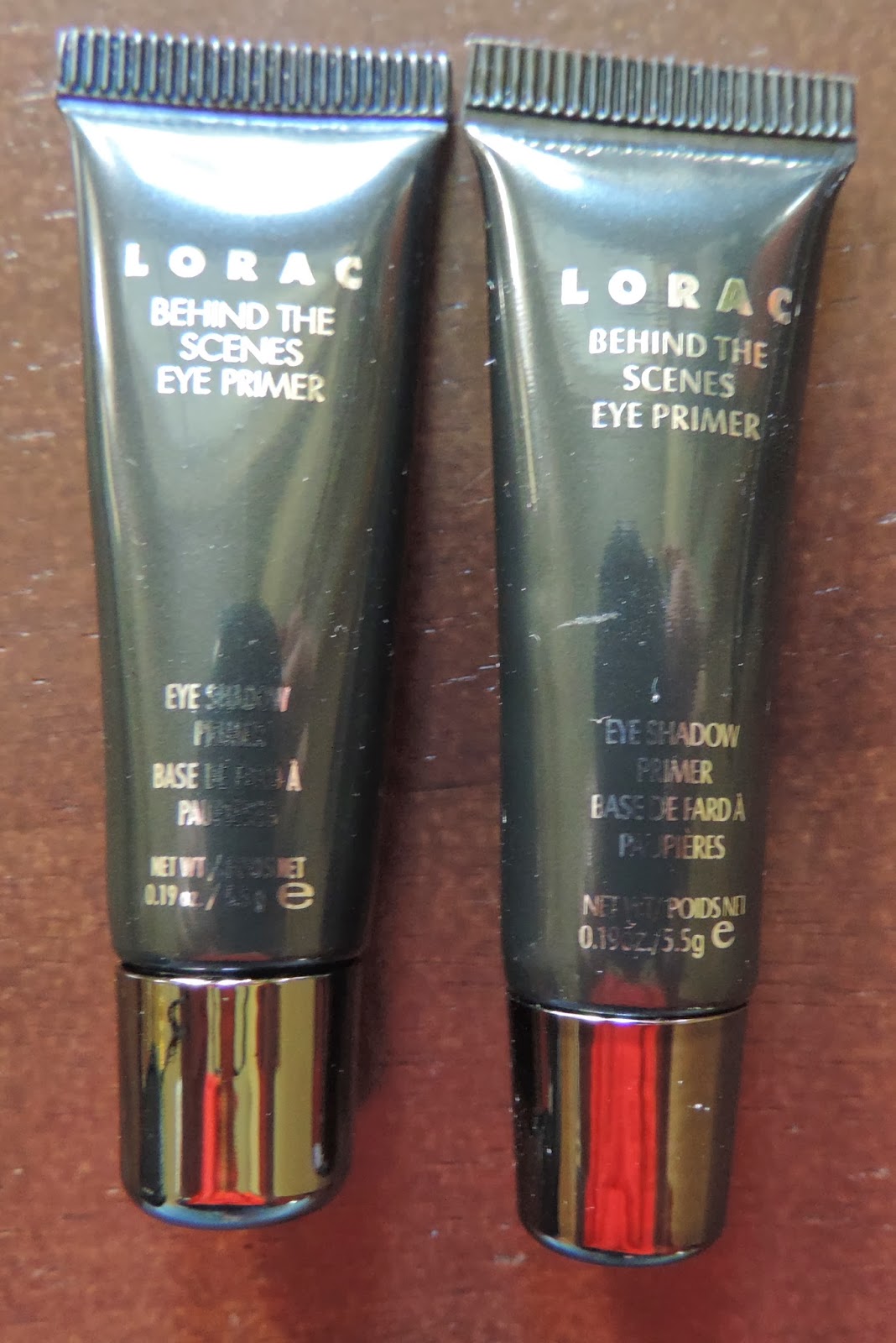 The primer is another interesting topic of interest. Not only is the font different on both, but the fake one is a smidgen longer than the real one.

Some of the shades looked very similar, but others were not. Take a look for yourself. 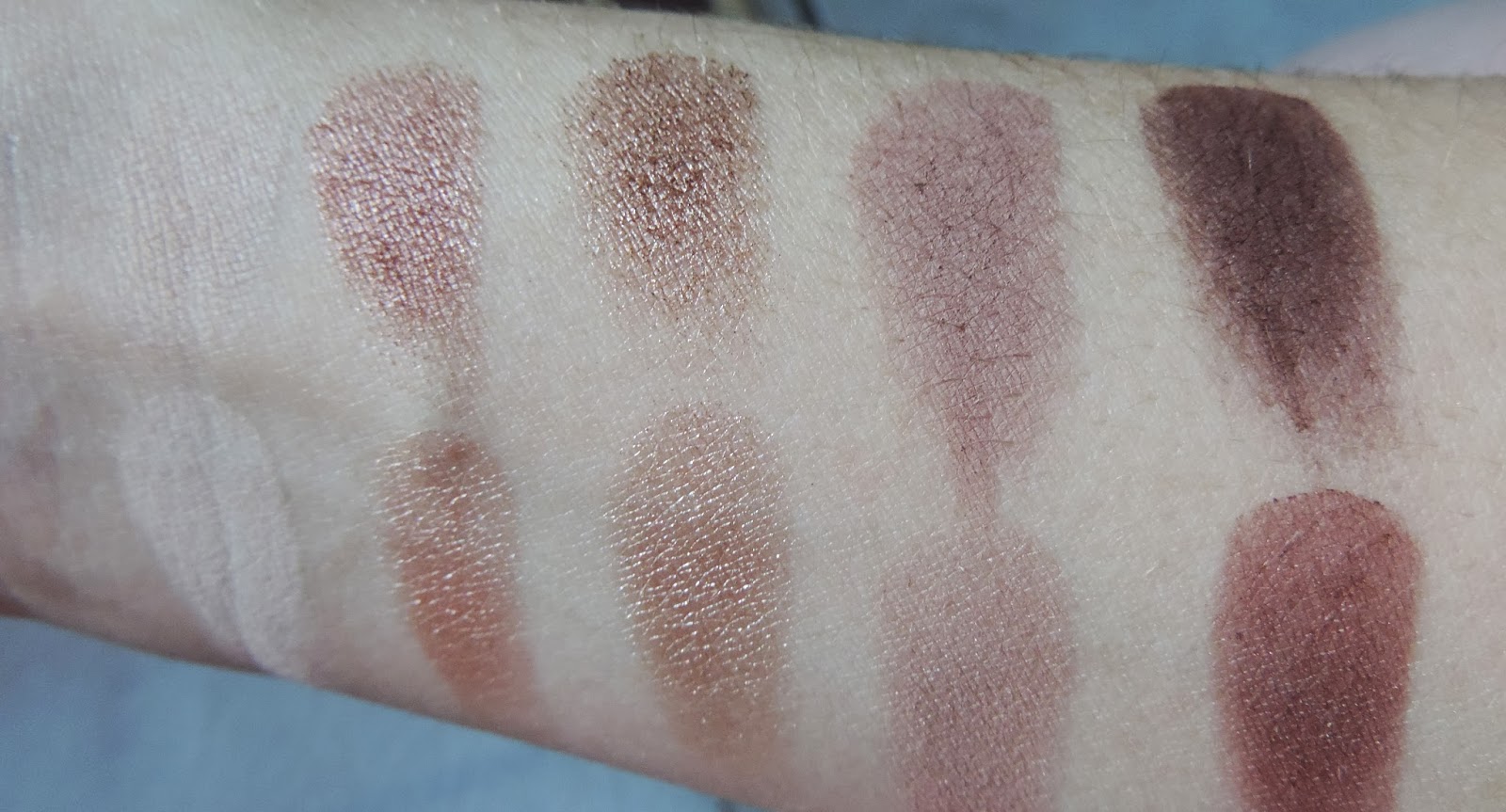 The lightest shade was less noticeable on me for the real eyeshadow, but was more pigmented in the fake one. The darkest shade on the right was more brown in the real palette, and was redder in the fake palette. 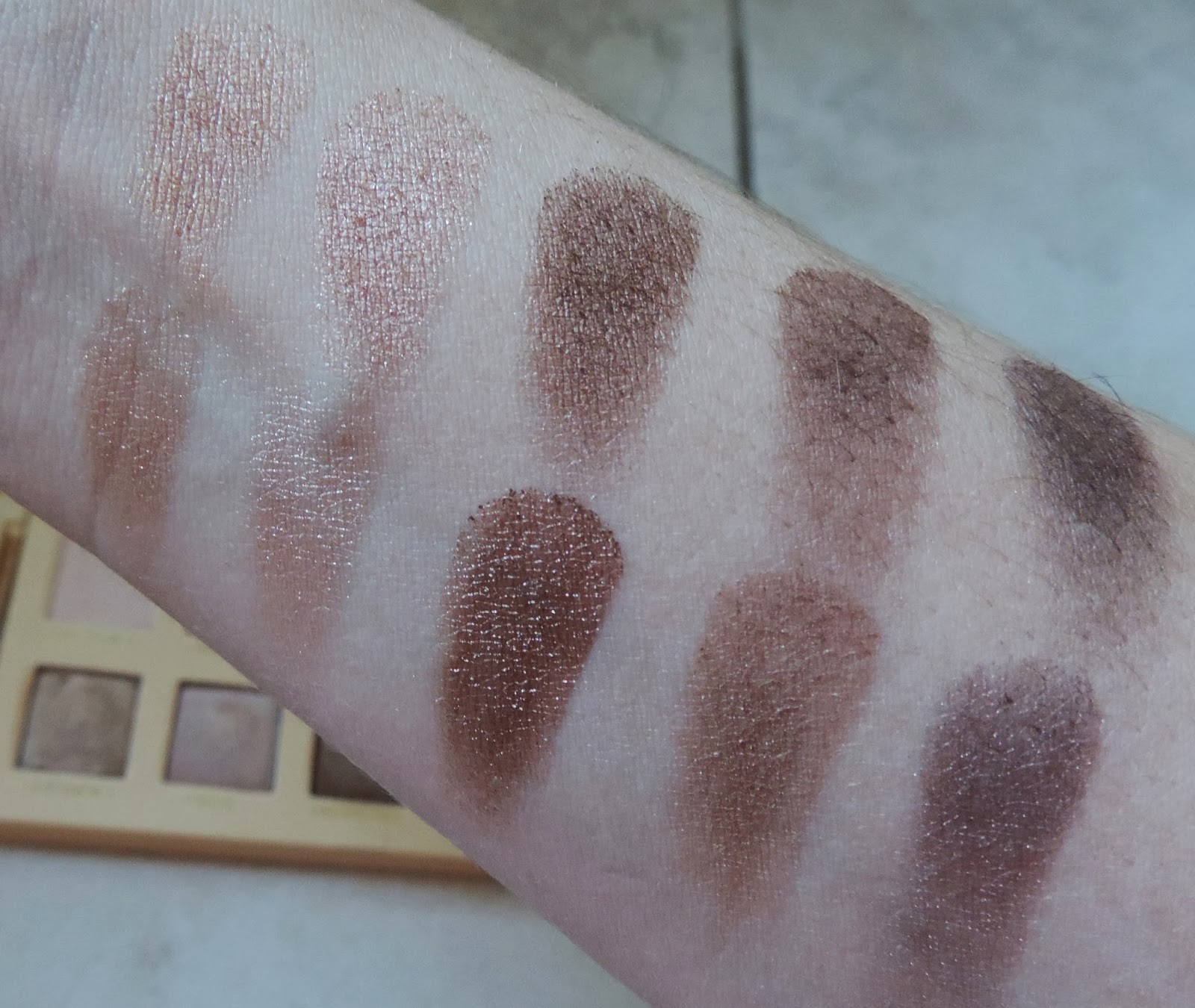 On the other half of the palette, both the real and fake shadows looked pretty similar to me.

As for the consistency, the fake palette was creamier then the original, which shocked me. Pigmentation was great for both, but there were the few key things that alerted me.

After I saw the difference for myself, I kept searching on the internet for "cheap Lorac Unzipped palettes" and found a website that is a "wholesale" for makeup products that sells the palette for $15. On the FAQs for that question, it says if it is authentic, real, replica, fake, and the answer was "Has the name brand, but is a replica". If you find the original to be pricey, this is a nice alternative if you don't mind having the authentic palette. However, all those imperfections put me aside, and the fact that I paid close to the original price for a fake, annoyed the crap out of me!

So I returned the palette to the seller, notified him that it was fake, and he was very sincere and told me he was sorry and that he didn't know, he just sold it as what he thought it was.

Whether he knew it was fake or not, I don't blame him. I blame myself for not thoroughly informing myself about these details. There is nothing wrong with ordering on eBay, just be sure you know it is real.

I enjoy reading your comments! So please feel free to leave me one. Thanks for stopping by my blog <3